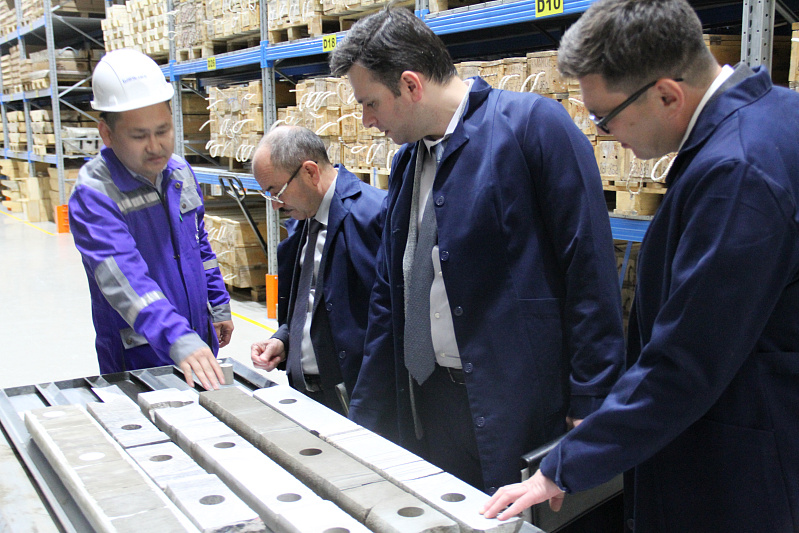 On May 15-17, Azerbaijani colleagues from SOCAR NIPIneftegas paid visits to two KMG Engineering branches: KazNIPImunaigas in Aktau and KMG Engineering Atyrau. Their visit was part of the implementation of a protocol signed in December last year based on the outcomes of a joint meeting.

Director Fakhreddin Ismayilov led a delegation from SOCAR NIPIneftegas to Kazakhstan as part of the visit. He was accompanied by Kakhir Ibadov, the Equipment Department Chief, and Ramazan Mammadov, the Atyrau Branch Director.

Bakyt Imanbayev, Director of KazNIPImunaigas KMG Engineering branch, introduced the administrative building and the Scientific Laboratory Research Center to the Azerbaijani colleagues during his visit to Aktau. The operating Competence Centers for online support of oil operations and hydraulic fracturing were also presented to the guests.

The representatives of the Azerbaijani delegation presented the results of SOCAR NIPIneftegaz work on demulsifiers-pressure inhibitors, downhole and infield equipment, corrosion protection and monitoring, well workover and subsurface maintenance, seismicity for direct search of oil and gas fields, high pressure air injection, EOR and other projects.

The next day, a bilateral discussion with the Azerbaijani side was held at the office of KMG Engineering Atyrau branch, led by director Rakhim Uteyev, to discuss future collaboration under the Protocol Articles.

The meeting participants discussed the possibility of joint participation in oil production arrangement, techniques, and technologies projects. In particular, the Azerbaijani side has proposed studying bactericides and demulsifiers in laboratory conditions for the fields of KMG NC. Interactions on the training of Kazakhstani engineers in offshore field development and engineering-geological surveys at sea, among other topics, were also discussed. Furthermore, aspects of accelerating the process of employees defending doctoral dissertations, exchange of experience on projects of arrangement and oil production techno-technologies, trips of internal trainers, and exchange of experience were considered.

A visit to the Center for Scientific Laboratory Research of the Atyrau branch, Introduction to the Management and Potential of Atyrau Oil and Gas University was arranged when visiting Aktau.